Wednesday, November 16, 2022
Note: This post was originally published on Monday, August 29th, 2022 at my other, now defunct, blog Bonne Raison. It has since been substantially revised and updated with an afterword.

A phobia is defined as:

a fear, horror, strong dislike, or aversion; especially an extreme or irrational fear aroused by a particular object or circumstance (1)

Arachnophobia (fear of spiders) and claustrophobia (fear of small spaces) are two, perhaps familiar, examples. However, in my experience, fewer people know about apeirophobia (fear of eternity). My aim with this blogpost is to change that. So I will now proceed to take apeirophobia out of a hitherto state of confusion and attempt to bring about some clarity on the topic.
First, to give you a taste of how this fear manifests itself, consider the situation that the main character in the movie Groundhog Day finds himself. Phil Connors (played by Bill Murray) somehow gets stuck in a seemingly endless cycle of having to repeatedly live the same day--Groundhog Day--over and over. In his despair, he commits suicide only to discover himself awakening on Groundhog Day, again. 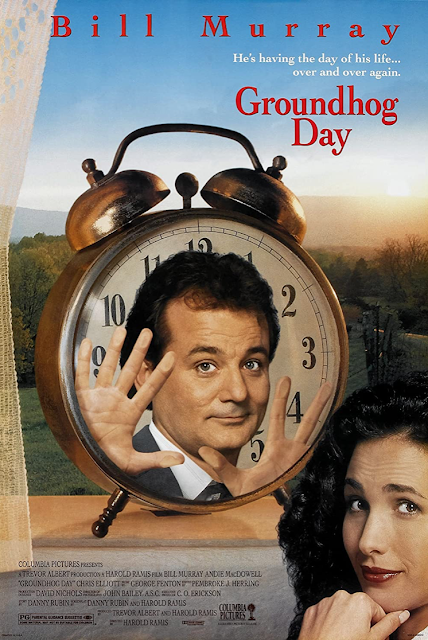 So, whether Connors likes it or not, it seems like there’s no escape! And for those with apeirophobia, the mere contemplation of such an inescapably eternal predicament can be absolutely terrifying.

This seems like the more common kind of apeirophobia and, more generally, the fear of death seems instinctive to our species as it has appeared widely across time and cultures. It can appear very early on in life and, for some people, seems to go away, if not altogether disappear, over time. However, some people continue to be afflicted by this fear and it’s those people who seem to be at greatest risk of developing long-term or chronic FEDA.

There are at least three common confusions about FEDA that one is likely to encounter:


Now let’s move onto the other kind of apeirophobia.

This seems like the rarer kind of apeirophobia. However, before I say anymore, a further distinction must be drawn out between two possible varieties of FELA.

Some might wonder, between the varieties, which situation is better? In my view, they are both terrible! However, as others have pointed out (2), the situation of Type 2 seems preferable to Type 1; though, I’d argue a finite existence followed by eternal death (FEED) is preferable to either.

Anyway, I don’t have time to make my case for FEED, that’ll have to wait for a future post. For now, I’ll just make two brief cases concerning the kinds of apeirophobia we’ve considered in this blogpost.

Death, as was pointed out more than two millennia ago, is nothing to us: when we are alive, death is not here. And when death comes, we no longer exist (3). When you think about, it’s hard to see what’s so scary about that? Consider what it was like before you were born. Seems like nothing. So why think that it will be any different after one dies?

Additionally, a contemporary argument by Galen Strawson, also seems to support the conclusion that death is nothing to us. If, on Strawson’s view, No Ownership of The Future is true, then one cannot even be harmed by an untimely death (4). So, at least, the only sensible conclusion I can think of is that a fear of eternal death seems rationally indefensible.

Other phobias don’t seem to have this fundamental flaw, though the risks are often exaggerated. Take a fear of heights. Falls can seriously harm you. So avoiding air travel or elevators would just be an irrational manifestation and exaggeration of an otherwise sensible concern. However, it's hard to see how death can constitute a harm for the person who dies. When you really think about it, it just doesn’t seem to make much sense.

Unfortunately, we may already be eternal beings; albeit in a situation like that of Type 2. There are two reasons which together might support it: Penrose’s theory of cyclical cosmology and Huemer’s argument for reincarnation.

Firstly, though many people already know about the Big Bang theory of the cosmos, there’s another, though not as widely popular, theory of the cosmos we should consider. According to the Nobel laureate Sir Roger Penrose’s Conformal Cyclic Cosmology (CCC):

the universe consists of a (perhaps infinite) succession of aeons, where each aeon originates with its own big bang and has an unending exponentially expanding future (5)

New theories come and go but, unfortunately for those suffering with FELA, a couple of CCC's predictions have apparently been confirmed. Those interested to learn more can watch this accessible video in which Penrose introduces and explains CCC.

Secondly, there’s an argument for reincarnation by philosopher Michael Huemer, according to which, the probability that you’ll be reincarnated infinitely many times is a hundred percent (6). Those interested to learn more can watch this accessible video in which Huemer introduces and explains his reincarnation argument.

So, given Penroses’s CCC and Huemer’s argument for reincarnation, it looks like a case can be made that we may, in fact, already be in a Type 2 situation. If so, then FELA doesn’t seem so irrational.

It's not been long since I published an earlier version of this post but, just recently, I got involved in a conversation about death on social media and, in the discussion, I brought apeirophobia up, so that’s why I came back to this topic so soon. This post was rushed and so I intend to return to it again in the very near future.

Popular posts from this blog

Wednesday, December 21, 2022
In this blogpost, I focus on the problem of epistemic trespassing . This happens when experts step outside their field of expertise and pass judgment on questions in fields where they lack expertise. Philosopher Joshua DiPaolo recently argued that epistemic trespassing is wrong insofar as it constitutes an abuse of expert authority that neglects novice vulnerabilities (1). I agree with DiPaolo and think that it's something more people should know about, especially at a time when a lot of knowledge is specialized and we--novices--often depend on experts for answers. So, below, I share a tragic example of epistemic trespassing that illustrates its harmful potential and very briefly consider possible solutions. Consider the following: A mother’s two infant children die suddenly and without any explanation. She’s charged with their murder and in court two possible explanations are considered: (i) that the infants died due to the rare sudden infant death syndrome (SIDS) or (ii) that s
Read more

What should philosophers aim at?

Wednesday, October 26, 2022
In a recent tweet, Keith Frankish suggested that philosophers shouldn’t aim at being right. Instead, he thinks that they should aim at being usefully wrong. Keith's tweet; used with permission This struck me as somewhat puzzling and got me thinking about what philosophers should aim at. As anyone who values knowledge will understand, sometimes being right really matters. For example, knowledge in advance of a potentially dangerous storm can sometimes save your life. Similarly, in philosophical areas like epistemology and ethics, being right about some issue or problem is also important and possibly for others, other than the inquiring philosopher, too. When being right is actually important For starters, the threat of External World Skepticism (EWS) poses a significant challenge to whatever you think you know about the world outside your own mind. You may believe that you have real friends. But if EWS is true, then you cannot know that the people you take to be your friends really
Read more